What is the Best Gelato Flavor?

Which is the best gelato flavor? I stumbled through the heat of the piazza, wiping the dust and sun from my eyes. The cobblestones feel like they’re shifting under my feet as I race over, the bells of the cathedral keeping time with my heartbeat. I take off my straw hat (a necessity in the Mediterranean heat of Italy) in reverence. The golds, rubies, and opals of the case glow, reflecting on my unworthy face.

No, this is not the arc of the covenant, a missing piece of the cross, or some other holy relic— though it does belong in a museum. This is much more important: it is gelato, perhaps Italy’s greatest gift to the world. Leonardo, Michelangelo, pizza, pasta, and straight roads are also contenders.

But gelato takes the cake.

One of our favorite gelaterias – La Romana

These early ice creams more closely resemble modern-day granita or sorbetto, Italian ices with a more slushy consistency. Thanks to Florentine noble Catherine de’ Medici, the ices were smoothed out by experimenting with the recipe, which included adding eggs and a few other tweaks when she emigrated and married French royalty and brought the custom north. The new style of ice was popularized in Italy and worldwide, and evolved through the years to become today’s ice cream and gelato. For more information, check out the Gelato Museum.

The traditional method for gelato production was to mix sugar, milk, and eggs, heat it, add flavors, then batch the gelato (introducing air into the mixture). Gelato has less air than American ice cream, allowing it to remain dense and creamy, giving gelato its trademark texture and decadence. Today, the more common approach is either the hot or cold process; the former includes pasteurized ingredients, as well as a flash-heating-flash-freezing process where the mixture is batched while it freezes. The less-common cold process uses raw ingredients that are already pasteurized, which are prepared and put in a batch freezer. Both processes produce microbiologically safe products, a necessity in today’s world (in Catherine de’ Medici’s time, a minor infection or the Inquisition could kill you tomorrow, so a little gelato was nothing to worry about). For more information on the preparation of gelato, check out this.
As anyone who has ever travelled in Italy can testify, gelato is ubiquitous and not all are created equal. Everyone has their list ready of the best gelaterias, and it can be hard to find the ice cream of the crop. Rick Steves touts Rome’s Gelateria Caffè Pasticceria Giolitti with “low take-away prices and elegant Old World seating,” as well as being geographically blessed with its position in front of the Pantheon. Bad-boy foodie Anthony Bourdain claims Gelateria dei Gracchi in the Prati district is probably the best of the best” in Rome, and Bourdain knows food. He’s eaten it all; I’m pretty sure I saw him eat a tin can sprinkled with cockroaches on an episode of his show before.

You are going to view this item on TheRomanGuy.com our main brand.

As for myself, I can’t remember the place where I had the best gelato of my life, but I’ll never forget the taste. It was my first night in Italy, visiting Florence.

I was immediately attracted by Firenze’s whirlwind of marble buildings, ubiquitous fleur-de-lis, and the leather smell of the market. But when I had my first gelato, that’s when I fell in love.

My father (an American attorney by trade, but an Italian farmhand by appetite) once told me to tell him when they ever invent a flavor better than vanilla. I never put much stock in it, trying cookie-doughs and chocolate-peanut butter flavors, never settling for simple. By one of those cosmic jokes that the universe doles out to shame us, I travelled thousands of miles to realize he may be on to something. That gelato almost made me a convert. 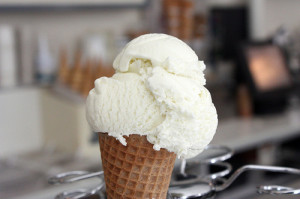 It was a simple crema, an Italian take on vanilla, with a custard-like consistency. An ivory dome in a plain sugar-cone setting, the gelato was simple in presentation but complex in execution. Innocent, yet knowing. The gelato was floral without being perfumey, the texture creamy, without a hint of ice. Years of ice cream experimentation, tinkering with toppings and sauces couldn’t prepare me for the simple shock of a crema cone. It was quite possibly the best thing I ever had.

Thousands of years, from the mountains of Persia and the villas of Rome to the simple gelaterias of Florence, and that crema gelato represents the epitome of ice cream. The jewel tones of fruit flavors and nut-studded options can’t compare, though delicious in their own right.

After all these years, I still can’t tell my dad that they’ve invented anything better than vanilla.

Did you find out which is your best gelato flavor?

Why not try one of our food tours in Rome!

Or Discover Rome, Venice and Florence ($239) with The Roman Guy – Italy Tours and Vacations.