Top Italian Cheeses You Must Try!

Growing up in Wisconsin, America’s Dairyland, I thought to be well versed in cheese. I grew up with a love for Cheddar, Colby, Muenster, Swiss, cheese curds…. you get the idea.

After moving to Italy over three years ago and discovering Italian cheeses; the likes of Burrata, Mozzarella di Bufala and Pecorino, it’s safe to say that my love for cheese has grown up a bit and has most definitely been solidified.

Here’s a list of the best Italian cheeses you absolutely must try! 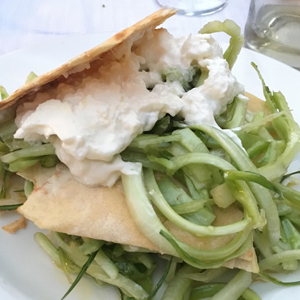 I still remember the first time I tried this creamy buttery cheese, it’s that good! With anything I love, I make it a point to know its history. Thankfully Burrata has an interesting one!

Thankfully, a blessed human was creative enough to have a thin outer layer of mozzarella, the closest thing to a rind that Burrata has, and fill it with fresh cream and soft stringy bits that remain after mozzarella making. Like any cheese, the fresher, the better!

You can pair Burrata many different ways. However, the best way I’ve ever eaten it was a summer evening dinner at Da Teo. Teo made a bed of puntarelle, also known as chicory, that was bathed in olive oil and anchovies, he placed a generous amount of Burrata on top and topped it off with pane carasau, a thin, crispy bread.

If you find yourself in Rome, call Da Teo, make a reservation, and most definitely have this dish as a starter!

After being introduced to Mozzarella di Bufala several years ago, regular mozzarella has forever been ruined for me (I’ve become a snob, I know!)

Whenever Mozzarella di Bufala comes up in conversation (you’d be surprised how often that actually happens) the first thing Italians ask me is: “e de Campania, no?”

Campania is a Southern region of Italy where this gift from the heavens originates from. Italians are sticklers for tradition, therefore, if something originates from a particular place, no other place can replicate it and it must come from there. So, Yes, of course, it’s from Campania!

Trust me, regular mozzarella will be dead to you too once you have a Caprese salad with its (better) alternative, Mozzarella di Bufala.

The best incorporation into pasta I’ve had is at Pianostrada, a charming restaurant that makes the most scrumptious ravioli di bufala! 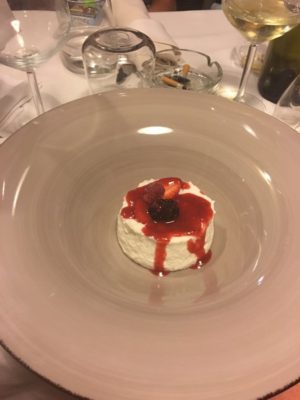 Ricotta is possibly the most diverse cheese of the bunch. Its diverse capability to be used in both sweet and savory foods never ceases to amaze me.

The interesting thing about Ricotta is that it’s been around for forever (Since the Bronze Age!) That’s around the second millennium BC. Can you even imagine what the world was like back then?!?! I can’t. At all. But I can vividly imagine shepherds sitting around drizzling honey on their Ricotta and thoroughly enjoying it. I say shepherds because they’re most likely the ones to have made it because Ricotta is a highly perishable cheese, therefore making its ability to be distributed to urban markets unlikely.

Something that fascinates me about Italy is that they are not a wasteful country. Some of the best dishes, foods and clothes have been created out of scraps of something else they were working on.

Ricotta is one of these creations. It started by using left over sheep, cow, goat, or water buffalo whey that was used to make other cheeses. Ricotta in Italian literally means recooked. Being the brilliant people that they were, they used the whey scraps, recooked it, and ta-da, we now get to enjoy Ricotta!

One of my favorite uses of Ricotta is when it’s used in desserts. And my favorite dessert using Ricotta is at this little Hosteria in Trastevere. They essentially made a version of cheesecake with Ricotta, drizzled it with a syrup of wild berries and called it a day. 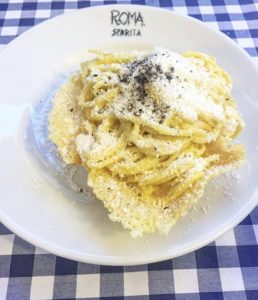 Finally, a hard cheese makes the list! Pecorino cheese is made from ewe’s milk. The Italian word pecora means sheep…are you seeing a trend here where most Italian food names literally come from the main ingredient used?

In Italy, it’s common to finish a meal with a cheese plate and more often than not, Pecorino cheese is the chosen cheese in Rome. It’s most likely served with pears and walnuts and drizzled with honey.

The best use of this cheese though is my beloved pasta dish Cacio e pepe, where Pecorino is the star of the dish! Cacio e pepe is a common pasta dish made in Lazio, but my favorite place to enjoy it is at Roma Sparita, a little restaurant in a little piazza in Trastevere. They serve you a perfectly made cacio e pepe inside a bowl made of Pecorino cheese. You read correctly, inside a bowl of pecorino cheese! Make a reservation days before going and enjoy rolling home afterwards. 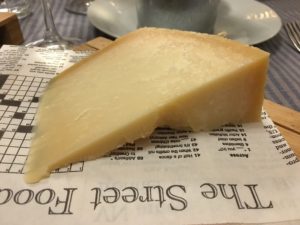 How can any Italian cheese list be complete without the famous Parmigiano – Reggiano? It can’t.

Other parts of the world try to replicate Parmesan cheese, however, none taste as good as the original from Emilia – Romagna in Northeast Italy.

It has famously been dubbed the ‘King of Cheeses’ and with good reason. Every single part of this cheese is used, including the rind, which is commonly used in soups. It can be used in risottos, grated over pasta or simply eaten in chunks as a starter dish.

You’d be hard pressed to find an Italian household that doesn’t always have a brick of Parmigiano in their fridge, it’s consumed that often. Every time I run out, I head to my local cheese shop, take a sample, and walk out with a new brick of it.

If you find yourself in Rome, definitely check out our food tour and give your tastebuds a treat!

If you’re looking for somewhere cheap to eat in Rome, make sure you read 10 Places to Eat Under 10€ in Rome!