Born in Tuscany, panzanella is a dish synonymous with the summer and the ultimate dish to enjoy during the hot months during this season. Mostly a staple of the Tuscan cuisine (but also typical of the Marche, Umbria and Lazio regions), it is a dish that is quite popular both in Italy and abroad. So what exactly is the story behind panzanella and how do you make it? Let’s find out with our Panzanella recipe!

It’s not quite clear how far back this dish goes but it is a dish so good that both the famous 14th century writer and poet, Boccaccio and the 16th century Florentine painter, Agnolo di Cosimo di Mariano a.k.a. il Bronzino make references to it in their works. Il Bronzino even went so far as to write a sort of famous poem declaring and immortalizing his “love” for it:

Not only is the precise timeframe of the invention of the dish unclear, there are also two schools of thought on who is responsible for inventing it: Those who believe panzanella is the result of the farmer’s tradition of wetting bread and then dressing it with their daily vegetable harvests and those who believe it’s creation came about on board fishing vessels where sailors, during fishing trips, dipped bread in sea water and then dressed it.

Though we can’t pin down exactly when this dish came about or who is responsible for it, we do know that the original recipe for panzanella calls for stale bread soaked in water that is then wrung out and tossed together with onion, cucumber, olive oil, vinegar, salt, and basil. The dish’s ingredients vary from region to region where it is typical and, over time, much to the horror of panzanella purists who consider these ingredient alterations blasphemy, different hybrid variations of the dish have been created, adding additional ingredients such as tomatoes, celery, salad, ham, anchovies, hard-boiled eggs, capers, cheese, carrots, radish, fennel, and tuna to up the flavor ante.

I myself am not a big fan of the cucumber, but I do love me some tomatoes, so I am going to share with you one of my favorite modern day versions of this classic dish, which is minus the cucumbers and heavy on the tomatoes; quite a delicious and flavorful revisited version of panzanella. Here we go!

1) Rinse cherry tomatoes, cut into quarters and place in a colander. Place the colander over a large mixing bowl. 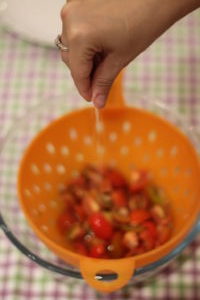 2) Sprinkle several generous pinches of salt over the tomatoes until they’re all salted and let sit for about 15 minutes. During these 15 minutes, the juice from the tomatoes will begin to drain down from the colander into the mixing bowl. 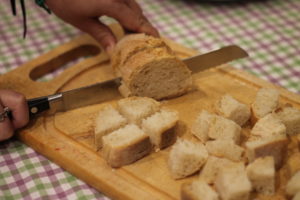 3) Slice the bread into equal slices and then cut those slices into fours so that you have cubes.  Then, lightly toast the bread on a griddle until it is golden brown. 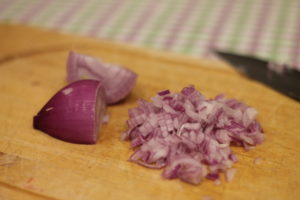 4) Mince the onion and put it in a different mixing bowl than the tomatoes.

5) Add the mustard and vinegar to the onions and while stirring, add in the salt and pepper as well. 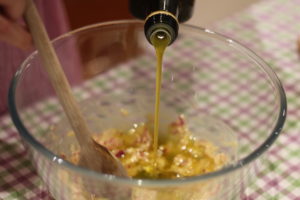 6) Slowly begin adding the olive oil a little at a time and stir while adding. Stop adding olive oil when you reach a liquidy consistency that isn’t too thick and has a bit of a sheen to it (more or less a cup’s worth of olive oil). 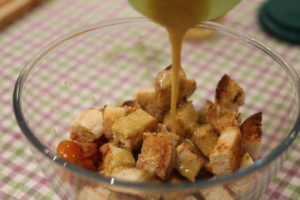 7) Add the tomatoes and toasted bread into the first mixing bowl with the drained tomato juice and then slowly pour the vinaigrette over them.

8) Begin mixing everything together until the bread and tomatoes are evenly dispersed and coated. I like to use my hands for this step because it is the best way to make sure everything gets mixed together uniformly. 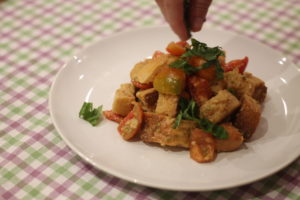 9) Plate the salad and sprinkle shredded basil leaves on top and serve.

There you have it, a simple and all-in-one summer meal that’s sure to please. Though historians and foodies alike can’t seem to agree on anything about panzanella, from what ingredients should be added to whom and exactly what time period this dish can be attributed to, we can all certainly agree that this Italian summer salad (even in all its evolutionary versions) is a hearty and absolutely delish summer treat…Enjoy!

Pizzerias in Rome You Shouldn’t Miss

Prosecco Champagne Differences, Which is best?