The Maritozzo is a typical sweet bun of the Lazio region, specifically from Rome. It’s a delicious dough based delight that has been enjoyed by Romans both young and old for centuries. Typically eaten for breakfast or in the very early hours of dawn, the Roman Maritozzo has undergone a few changes before landing the version we know and love today.

Let’s take a look at this pastry’s origins and how certain chefs refuse to leave well enough alone and continue to put it through the evolutionary process to create spectacular, new savory versions.

Dating back to Roman times, the “loaf” that the modern day maritozzo derives from began as a nutritional necessity made of flour, eggs, honey, butter and salt. These loaves were substantially larger than the maritozzo of today. 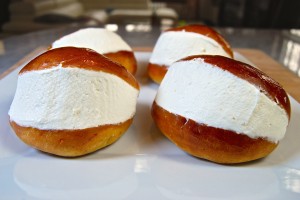 It is said that for centuries, women made the loaves to put in the saddlebags of laborers who had to work away from home all day as a way to nourish themselves. Then, in the Middle Ages, the loaves became a way for people to get their “sweet fix” during the period of Lent. These loaves were a bit smaller, darker in color, and sweetened with raisins, pine nuts, and candied fruit. This Middle Ages version of the maritozzo was one of the few “church approved” foods people were permitted to eat during the fasting of Lent.

It wasn’t until the 1800s that the “loaves” were given their current name, maritozzo which is derived from the Italian word for husband, “marito.” During the 1800s, this name was given to the pastry because it became associated with another tradition. The tradition was that a girl’s fiancé would give his bride-to-be a maritozzo the first Friday of March.  This Valentine’s-Day-equivalent pastry usually had two pierced hearts on top drawn with sugar. Inside frequently concealed a gift of either a ring or a small gold object.

The maritozzo is still a staple in Rome and the classic version is still a very simple dough that is then baked, split down the middle and filled with a delicious (yet obscene amount of) whipped cream. If you’re looking for a good place to get your hands on this Roman classic, one of the best places in Rome for a maritozzo is Er Maritozzaro located a 2mins walk from Trastevere station.  Their classic maritozzo, when hot, just out of the oven and filled with whipped cream is pure poetry!

Though the maritozzo has always traditionally been sweet, there are some restaurants in Rome that have been revisiting  the classic recipe and reinventing it by creating a savory version: 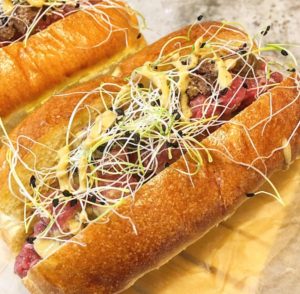 Downing Square which opened in June 2016, is the first tartare bar in Italy and as if that weren’t innovative enough, they have also revisited the traditional maritozzo in the most stellar, savory way imaginable.

I had the opportunity to speak with Mattia Chialastri, owner of Downing Square and I asked him how the idea for this modern-twist on an old classic came about? 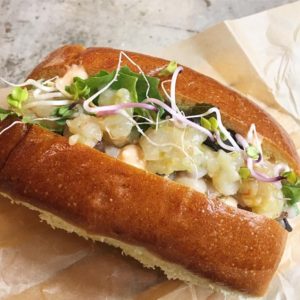 At Madre, a new restaurant here in Rome which opened in July 2016, chef Riccardo Di Giacinto has taken the cream filled pastry and revamped it into a savory delight. The Michelin star chef offers the maritozzo in 5 different savory versions, including eggplant parmesan, organic chicken salad and burrata cheese and anchovy. Difficult choices need to be made!

Classic or modern version, the maritozzo has become a time honored food tradition that is celebrated in Roman culture. Whether you prefer salty or sweet, you’ll be hard pressed not to find a delicious maritozzo. Take my advice and run, don’t walk, to try one today. Happy eating!

Where to Spend Your Thanksgiving in Rome 2016

Most Romantic Restaurants in Florence