Italy, though a country with centuries worth of history, did not become a united country until 1861. Before that time, the regions of Italy were basically existing as independent city-states. For this reason, not only does each region of Italy have its own dialect, but it has its own cuisine. Italy, comprised of 20 regions total, is home to the following Italian cities, which are the most well-known not only within these regions, but in all of Italy and from each of these cities comes a dish that defines Italian cuisine. Steeped in history and legend, here are 10 traditional foods of Italy – tasty dishes you must try when you visit!

A typical dish of Sicily, since the 1700s, caponata has been a staple of Sicilian cuisine. Because it was somewhat of a complete dish, it was served as a main course accompanied by bread. Today, it is usually served as a side dish. Originally, it was the aristocrats of society that used to eat caponata and it was a fish-based dish. Over time, the fish was replaced by eggplant as the humble working classes could not afford to buy quality fish in order to prepare the dish. Caponata’s main ingredient is eggplant, which is widely grown in the region. Caponata has more than 30 recipe variants in Sicily. However, the original caponata recipe comes from Palermo and the exact recipe ingredients used there are: eggplant, green olives, capers, tomato sauce, white celery and onion.

Pesto, from the Liguria region, or more specifically, Genoa, first came on the scene in the 19th century. It is most likely the evolution of a Ligurian mortar and pestle ground sauce known as agliata which has a garlic and walnut base and was widespread in Liguria during the Genoa Maritime Republic. Pesto is made by grinding basil with salt, pine nuts, garlic, cheese and extra virgin olive oil. It is therefore a raw sauce, as the ingredients are cold-blended, not cooked. The traditional recipe calls for 7 very specific ingredients: basil leaves, extra virgin olive oil, pine nuts, parmesan cheese, fiore sardo cheese, garlic and coarse salt. The raw sauce or paste is not only used as a pasta sauce but also eaten as a spread on warm focaccia bread. Divine!

Tortellini in Brodo or tortellini served in broth, is a typical dish of the Emilia-Romagna region. This dish is specifically served in the city of Bologna. The tortellini pasta itself has several legends surrounding its origins. One legend goes that the owner of an inn called Corona in Castelfranco Emilia was peeping through the keyhole of the room of a noblewoman and her guest and was so mesmerized by the beauty of her navel, he wanted to pay culinary homage to it by creating something similar in form.

Another variation of the story is inspired by the 17th century mock-heroic epic poem, “Secchia Rapita” by Tassoni. The story goes that one evening, after a day of battle between Bologna and Modena, Venus, Bacchus and Mars were having dinner at the Corona. The next morning, Mars and Bacchus left the inn, leaving sleeping Venus behind. Upon awakening, Venus called out for someone and the innkeeper came running. He was surprised by what he found when he encountered the goddess. Her form left such an impression on him that, with the beautiful shape of the goddess still fresh in his mind, he darted back into the kitchen trying to recreate what he had seen by tearing off a piece of dough, filling it and then folding it over, giving it the shape of the goddess’ navel.

Gnocchi, or potato dumplings, which are a typical Veronese tradition, can be traced back many centuries. To be precise, they can be traced back to the Veronese mardi gras, whose origin dates back to 1531. During that year, a famine brought the city to the brink of revolt, specifically in the district of San Zeno. At the time, this was the most populated and poor of the city. To restore calm to the city, the nobleman, Tommaso Da Vico distributed bread, wine, butter, flour and cheese to the people on the last Friday before Lent. In his will, Da Vico specified that on that specific date, the residents of San Zeno should receive free food.

This episode gave rise to the tradition of Friday Gnocolar. This is the main event at the Verona carnival or mardi gras (which takes place the last Friday before Lent). During which, there is a great parade through the main streets of the historic center of Verona. The gnocchi during Da Vico’s time were made with a paste of flour and water. This is because the potato had not yet arrived and didn’t arrive until the second half of the eighteenth century. Today, traditional Veronese gnocchi is considered a simple recipe of potatoes, flour, nutmeg and salt, which after being cooked, can be dressed with any myriad of traditional pasta sauces. 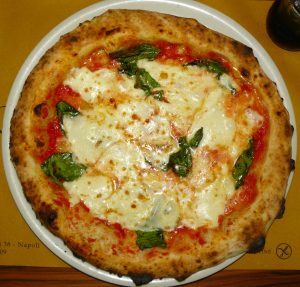 Although it’s considered a staple of Italian culinary tradition (and especially of Naples), Egyptians, Greeks and even Romans cooked very similar crushed buns. Thus, pizza has a very long, complex, and ambiguous history. However, the first evidence of the word “pizza” dates back to 997 near Gaeta. In antiquity, in the Mediterranean, pizza was a poor man’s dish made with lard, cheese and basil (sometimes with leftover fish parts). Pizza flavors as we know them began in 1889 when, the Neapolitan premier pizza maker at the time, Raffaele Esposito created the pizza Margherita in honor of Queen Margherita of Savoy.

The Margherita is made with tomato, mozzarella and basil (the 3 colors of the Italian flag) in honor of the Queen and of Italy. Until about 1830, pizza was sold exclusively out of street stalls and by street vendors out in front of their bakeries. Over time, pizzerias as we know them today, began. The ancient Port’Alba pizzeria in Naples is considered the oldest Italian pizzeria and still exists today! Next time you’re in Naples, stop by for a delectable slice.

Panna cotta is a typical dessert from the Piedmont region of which Turin is the capital. Though its origins are uncertain, the Piedmont region has identified the panna cotta as a traditional food of the area, dating back to the early twentieth century, when, in Langhe (another area of Piedmont), it was invented by a lady of Hungarian origin. Panna cotta is a kind of white pudding made with cream, traditionally prepared with gelatin. Some variants of the panna cotta include preparing it with egg whites in place of the gelatin. The panna cotta is typically served with caramel glaze drizzled over the top, or sweetened with fruit sauces, or with a cooked fruit compote. 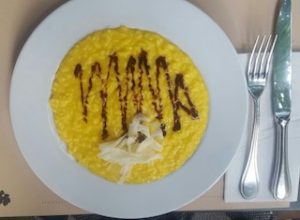 Risotto alla Milanese, a typical dish of Milan, is a direct descendant of “rice with zafran,” a type of rice pilaf with saffron, which was a medieval recipe eaten by both Jews and Arabs. The official birth of rice with zafran is September 8, 1574. The evolution from standard rice dishes to risotto alla milanese was a bit slow. It wasn’t until 1779, when we saw the first instance of rice sautéed in butter. Once sautéed, hot broth is added to it. Later in the years, chopped onion began being added as well.

“Riso giallo in padella” or yellow rice in a skillet, made its first appearance in a cookbook in 1809. In this recipe, rice is sautéed in butter, beef bone marrow, onion and then has hot broth added to it, at which point, saffron is dissolved in it. In 1929, Milanese chef, Felice Luraschi gave the dish its name, “risotto alla Milanese giallo” or yellow Milanese risotto. Chef Luraschi’s recipe calls for rice, fat, beef bone marrow, saffron, nutmeg, and stock. Once cooked, it is topped off with grated parmesan cheese.

Polenta e schie or as it is called in Venetian dialect, poenta e schie. This typical dish is comonnly found in Venice. Schie are a shrimp found only in the Venetian lagoon, which runs between Venice and Trieste. These grey colored shrimp differ in size and color from typical shrimp. Their flavor is very rich and unique and they are considered a real delicacy. Poenta e schie is prepared by frying the schie and then serving it on a bed of white polenta made from corn flour, commonly found in the Veneto region. Today, the schie are found mainly in the winter and are sold still alive at local fish markets. Their liveliness guarantees a degree of absolute freshness of this shellfish. Today, these shellfish are consumed fried or stewed by all social classes of locals.

According to tradition, the birth of this specialty is thanks to the de Medici family. This family once ruled Florence in the fifteenth and seventeenth century. During their reign, on the occasion of San Lorenzo or Saint Lawrence, which is celebrated on August 10th, the people of Florence were offered ox quarters. These ox quarters were roasted in the major squares of the city. The date commemorates the martyrdom of Saint Lawrence who was martyred in Rome.

Legend has it that Lorenzo was sentenced to be burned and during his “roasting,” he was heard saying the following words to the executioner: “And now turn me over on the other side because I am already cooked on this side.” Bistecca alla Fiorentina is obtained from the cut of loin of Chianina beef. In the middle it has a bone in the shape of a “T,” what we in English call T-bone steak. It is called that because the fillet is on one side and the sirloin on the other.

La Gricia, a typical pasta dish in Rome was born in the town of Amatrice, in the province of Rieti at the border between Lazio and Abruzzo. There are two interesting theories on how the dish’s name came about. The first theory attributes the name to the “Gricio” as he was called in Rome. He was known as a seller of bread and other foodstuffs. The other theory holds that it gets its name from the name of the village near Amatrice called Grisciano.

In any event, we know that La Gricia is a dish that was mainly consumed by the shepherds who were going to pastures and carried lard, dried pasta, bacon, pepper and pecorino cheese with them in their knapsacks. These are the only ingredients necessary to prepare this simple and delicious pasta dish still widely diffused today in Rome. In the 19th century, a variant of the recipe which included the addition of tomato began. This gave birth to another famous Roman pasta dish, known as Amatriciana.

The best place to eat any of the above mentioned dishes is in their specific regions. Though many of these dishes are offered outside their respective cities, they will never taste as good as they do in their city of origin. Next time you’re in any of the cities listed in this article, ordering some of the delicious, history-ladened local cuisine. Happy eating!

5 Delicious Italian Wines to Look Out For in 2017