Say Fettuccine Alfredo to American people and what comes to their minds is, “the epitome of Italian cuisine; the ultimate Italian dish.” Say “fettuccine Alfredo” to the average Italian person and they’ll ask you, “Who’s Alfredo?” Italians have no clue what it is! So how do we account for this huge difference in how this dish is perceived from one country to another? Well, here is the story as told to me by the heirs of the legacy of Alfredo Di Lelio. This man is said to be the original inventor of this tasty dish. Brace yourselves because it’s about to get telenovela interesting.

How the Dish Came About 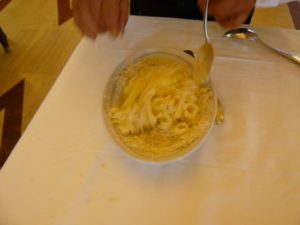 In 1908 in Rome, Alfredo Di Lelio and his wife had their first child, Alfredo II. During those times, women gave birth in their own home and not at the hospital. After giving birth, his wife was particularly fatigued and lacking strength. From this, Alfredo came up with a new meal  that would help restore his wife’s strength and make her better. What he came up with was fresh egg noodle fettuccine in a creamy sauce, created by mixing an abundant amount of butter and parmesan cheese together in just the right proportions.

This creamy creation provided a nutritious dish which not only restored his wife’s energy but was also delicious. It was so good that she encouraged him to include it on the menu at the family restaurant. Alfredo took his wife’s advice and slowly his creation began to catch on.

The Success of Fettuccine Alfredo 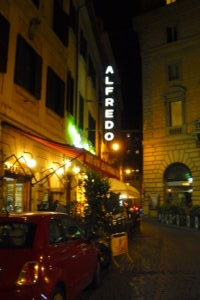 In 1910, new zoning regulations caused Piazza Rosa, the square where the family run restaurant was located, to be eliminated. Alfredo packed it up and moved his delicious pastaover to via della Scrofa where he opened his own restaurant, Alfredo alla Scrofa and worked from 1914 to 1940. In the 1920s, Mary Pickford and Douglas Fairbanks (both megastars at the time) had dinner there and loved the pasta. When they returned home, they told all of Hollywood about how they had discovered this dish during a trip to Rome and how divine it was. They were such huge fans that in 1927, they decided to give Alfredo a gift. The present he received was a gold fork and spoon with an engraved dedication.

The spoon and fork had writing on it declaring him the King of Noodles. Soon other celebrities followed suit and became loyal patrons. During these years, Alfredo had managed to gain quite a following. As Alfredo’s granddaughter, Ines Di Lelio puts it, the true success of this pasta began with these two actors. Not too long after the pasta gained notoriety, World War II was underway. During those years, there was financial difficulty. From this, Alfredo made the brave decision to sell his restaurant to his waiters and leave the restaurant scene temporarily. 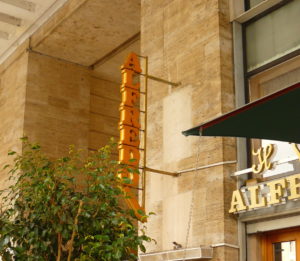 In 1950, Alfredo decided to give it one more try and open yet another restaurant. At Piazza Augusto Imperatore, he opened Il Vero Alfredo, not too far away from the via della Scrofa location. There, he continued offering his famous fettuccine Alfredo on the new restaurant menu.

However, the location at via della Scrofa continued to serve the fettuccine Alfredo. They also decided to carry on the tradition that Alfredo had brought there. This lead to a competition and debate between the two locations as to who truly serves “the real fettuccine Alfredo” that is still going on today. A local newspaper caught wind of the rivalry shortly after Il Vero Alfredo opened. They even wrote an article called “The War of the Alfredos.”

The War of the Alfredos 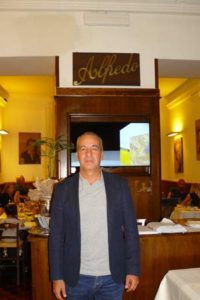 Both locations still exist today and have celebrity clients. Both locations also insist that theirs is the real Alfredo. MarioMozzetti (pictured here), grandson of the waiters who bought the location from Alfredo in 1943 and one of the current owners of Alfredo alla Scrofa said: “We are somewhat disputed and a bit envied by competitors due to the fact that the fettuccine were born here and that we’re spreading it all over the world, so there is some controversy.”

According to him, “Though the heirs of Alfredo do in fact make fettuccine Alfredo as they are the heirs of Alfredo, they continue to dispute the maternity of these noodles because they are jealous.” He continued saying, “We keep going down our path; our history is one of the oldest in existence regarding the fettuccine. We’ve even got books dating back to 1927 where there are autographs from very famous people including Marilyn Monroe. This is the real story, no matter what you hear…”

But Ines, Alfredo’s granddaughter (pictured here with her daughter, Chiara) tells it differently. She says that when the home of the real fettuccine Alfredo was first brought into question, her grandfather underestimated the problem saying, “What do I care? I know I’m Alfredo. Let them say whatever they want”. 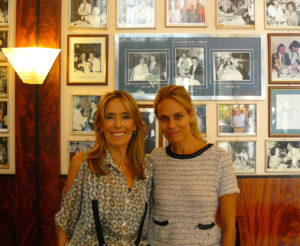 According to her, he wasn’t worried what people believed because his Hollywood following followed him to his new location. Even clients such as James Stewart, Burt Lancaster, Frank Sinatra, and Elizabeth Taylor patronized the new location. Ines is the third generation to run Alfredo’s last restaurant along with her family. They are all hardworking people and are committed to keeping the legacy going. As Ines says, her family cannot let theempire her grandfather created, fall. 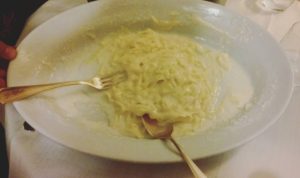 Although Di Lelio and Mozzetti don’t agree on which location is the home to Alfredo, they do agree on somethings. Both say that the reason Italians don’t know about the dish is because it had such a boom in the U.S. that Italians wrote the dish off as something for tourists and over time it completely disappeared from the Italian food scene. Both also say that the true recipe is simply fresh egg noodle fettuccine in a sauce of only butter and parmesan, but the precise quantities of these ingredients are a heavily guarded secret.

However, I can tell you that it is approximately 2-3 ounces of both fresh butter and parmesan per serving. The believe that the modern day versions that we have in other countries are a disgrace to the original recipe. Most of these recipes include adding the ingredients such as cream, chicken, and shrimp. They believe these versions should NOT be considered fettuccine Alfredo.

So there you have it, fettuccine Alfredo is actually an authentic Italian dish. Though quite unknown to the average Italian and the precise location of its birth, we can all agree it’s delicious!

Cappuccino Etiquette 101 – Are you drinking it right?